How will augmented virtual reality force us to rethink the way we browse and consume information on the Internet?

With virtual reality headsets like HTC Vive, Sony’s Project Morpheus, Microsoft HoloLens, and Facebook’s Oculus Rift firmly on the horizon and approaching at speed, there’s a lot to be excited about. These headsets and the subsequent plethora of input accessories being developed around them provide a way to interact more naturally with immersive 3D virtual environments. For gamers VR technology will be, ahem, game changing. For film and television it could end up being a novelty or, if the technology to properly capture VR footage is fully realized, it could reshape the industry. What hasn’t been discussed as much is how it might impact the way we browse the net.

Text is currently the ultimate communication method, it ticks a lot of boxes: it conveys detail easily, it can be skimmed for an overview and jumped around within, it can be designed to highlight important points, and can be consumed at different paces. These factors—Detail, Navigability, Design, and Consumption Speed—determine how optimal any medium is for communication. And while there are advantages with audio and video, they are linear in their navigation, fixed in their consumption speed, and rely on text descriptors for an overview of their content, making them difficult to skim through effectively.

The Past and Present of Text

As we move to new devices, text still looks to be the mainstay, even with the small screens of smartwatches. Apps such as Spritz, which uses the fact we identify words by their shape, flash up words one by one, positioned for the quickest possible recognition. This allows anyone to speed-read at surprisingly fast rates. There is even a desktop browser version available to speed through webpages one word at a time. Although this method loses navigability and design aspects, it still allows for personalized consumption speed and retains detail. It also highlights that things can be done differently.

The strangest thing about text is the fact we managed to adopt it to convey our inner thoughts in the first place. It’s an abstraction of reality—a formalized two-dimensional replacement for the rich, sensual, and vivid inner and outer worlds we naturally inhabit. Yet it has endured, from ancient times to the disorientating, fast, data-dense present. In which case one must assume it will either continue to endure, be augmented for new platforms (as Spritz has done for smart watches), or be replaced by a more optimal medium. What does this mean in the era of virtual reality?

At least initially the advantage of browsing the web in VR would be the navigability. When a search pulls up results they can be arrayed in a three-dimensional space and clustered by similarities—perhaps subsets of key words and phrases, as well as video loops hovering near them like tag clouds. Glancing around at these you would be able to skim a lot of data quicker than scrolling a page.

Customization could allow you to position bookmarked sites’ results in familiar positions so you can get straight to them. Or perhaps the keywords are pulled out and represented as 3D objects arrayed around you, creating a bizarre physical environment you can scan quickly to find the relevant points of interest. Either way, gestural control and spatial familiarity in an extra dimension are going to allow us to scan data much faster.

This is where things get hazy. Are we really going to sit in our 3D real world, experiencing another 3D virtual world, in order to read a 2D medium? Where is the added benefit? Well, one could imagine that text arrayed in 3D space might allow faster scanning than on a screen, in the same way that scrolling is faster than turning pages. Or perhaps we will be designing articles in an entirely new way, chunks of text hanging amid the objects and slices of environments they relate to.

Perhaps an historic quote is read to you by the very person who said it; a living world of communication is conjured up around the article’s subject matter. Something that is not understood can be zoomed into, carrying you into a new macroscopic realm filled with more detail. Perhaps the experience would be more like a museum exhibit without the walking: everything is in arms reach, as you trigger panels of video, 3D characters, audio, and read at the same time.

While it’s true that you already play a video while reading an article online, it’s certainly not as convenient as being able to play multiple videos at once and merely glance around to switch your attention between them and something you are reading.

Eye tracking within VR headsets could potentially allow the environment you are in to change dependent on where you are up to in the text you reading, even when you skip back and forth.

With the advent of smartphones, textual elements of websites and apps were simplified. Icons began to replace navigation prompts and as people became increasingly literate using these symbols, they were widely adopted.

The same thing will happen will happen with VR. Three-dimensional objects will replace as much non-verbose text as possible, perhaps always hovering near you as the replacement for browser chrome or potentially as a kind of heads-up display. Depending on the purpose of the website, some may forgo text entirely, perhaps replacing it with a 3D environment and avatars with whom you have conversations to get information—a more natural method for some. The net might become mostly a connected series of environments, like William Gibson’s vision of cyberspace.

Computer games will continue to create a lot of the metaphors and interfaces for the virtual reality web. As well as the in-game interfaces, the cut-scenes and tutorials will be utilizing techniques that can be used to convey information effectively in other scenarios.

The Future of Textual Experience

The standards for communicating information within virtual reality are not yet formed. They will grow and evolve naturally as they did in the two-dimensional Internet. Design metaphors will be experimented with and some will become widely adopted. Will video and animation be navigable via some sort of representation of four-dimensional space in 3D, enabling us to walk through points in time like a scene from the film Interstellar? Will net users be visible to each other, flitting around from site to site, commenting to each other’s avatars in real time, and leaving ghosts of themselves to represent older comments? Or will we each customize our own experience, with some of us choosing to fly spaceships through star fields of data as we search while others choose to stare down at a vast grid of pages, meticulously color-coded to meet their needs? Still others might navigate this new environment like a kid bouncing through a landscape of innocuous filtered content, with different information sources calling out to them.

Perhaps we will create a way to scan through an experience more effectively than scanning through text. Although it’s hard to imagine, user experience will be an even more complex field, limited, it seems, only by imagination and bandwidth. On the other hand, VR may be a temporal blip, much like it was in the ‘90s, only really affecting the gaming industry and never breaking into mass adoption for other purposes.

For now, it seems like it is up to us to define what VR will truly become. Adam Ferns, Adam Ferns has over 15 years experience in digital media. Founder of London multimedia studio Rare Sense, he cut his teeth on e-learning, web and interactive design going on to team up with London startup FXpansion designing award-winning music production software. Since relocating to Melbourne seven years ago, he has worked as art director, digital designer, and UX designer for a colourful array of high-end clients. With a great love of the arts, nature, and emerging technologies Adam is most interested in the intersection of these three fields, and their ability to shape society for the better. 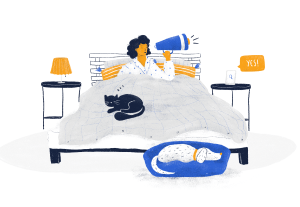