In web marketing, there is a push towards ever more granular data. One manifestation of this is the trend towards personalization. Whether it’s behavioral ad re-targeting, or dynamic content-serving based on past purchases or other data, marketers are better able to act on customer information than ever before. Another trend has been the development of personas and marketing segmentation based on the general preferences of user types defined demographic data such as age, sex, economic grouping, and so on.

A further trend that is starting to emerge is the identification of user behavior related to culture. Global brands especially are noticing distinct differences in cultural preferences for the way content is presented between languages, and even within the same language group. We are GlobalMaxer and Oban Multilingual help global companies find themselves around the maze of cultural knowledge when marketing for the web.

Below are the top five things to consider when designing UX tests with culture in mind.

The colors that are used in designs may have hidden but important cultural significance. In a paper called Culture’s Consequences: International Differences in Work-Related Values, cultural psychologist Geert Hofstede theorized that as much as 80% of cultural understanding is subconscious. So it could be argued that perception of the colors used in design could be influenced by deep-rooted cultural preferences. For example, the color red has a number of possible connotations in Western cultures: it’s the color of danger, but also of action. In Chinese culture, red is considered a color of good luck and celebration, but in South Africa and Ivory Coast it is a color of mourning. Green means “go” in the West, whereas green means “danger” in Malaysia. So brands should be nimble in adapting colors to cultural preferences.

Translating content from language to language is seldom good enough. Localization means turning the spirit of the original text into the true vernacular in each country, including accepting loan words. The Web started in English and has spread across all languages and scripts, so shorthand phrases, abbreviations, common technological jargon, and hybrid terms have developed such that each country has its own lexicon of web language. For example, here at Oban Multilingual we did some keyword research for our client eBookers in Italy. We discovered that the UK-English phrase “cheap flights” when translated as “voli economici” had 33,000 searches in Google Italy each month. However, the hybrid English–Italian phrase “voli low cost” had nearly eight times that volume, with 246,000 searches. This principle also extends to headings, navigation, and sign-posting. Find the best local phrase or word that fits your customers’ needs, not a translation.

George Bernard Shaw once said, “America and Britain are two nations divided by a common language.” However, it’s not just the English language that has internal cultural divisions. As modern Western society has embraced multi-culturalism, elements of each culture have been absorbed, recombined, or discarded to varying extents in different societies.

In multivariate testing of the Chinese fan website of the soccer club Manchester United, we discovered extraordinary differences in behavior between resident Chinese visitors and visitors to the Chinese website from the rest of the world. Not only was there up to a 27% difference in overall conversion rate between the two cultural groups, but key differences in the presentation of the page such as larger font sizes and use of scroll bars were strongly preferred by the Chinese group, but actually worsened site performance for visitors from the rest of the world. The test results suggest that the non-resident group were more tolerant towards a westernised view of Chinese design, probably from being more familiar with brand sites that use a consistent format and template, but transliterate the content. By extension, there will also be sensitivities that can help improve web experience in bilingual or multilingual societies such as Spanish speaking America, French Canada, much of bilingual Africa, and Europe, among others.

Edward T. Hall identified differences between what he called high context, polychronic cultures and low context, monochronic cultures. Hall states that high-context societies such as China or Japan have multi-layered communication that not only includes the sound and apparent meaning of the words, but also includes factors such as awareness of shared knowledge and intonation. Germany or Scandinavia, Hall says, are low-context and communication is single layered, direct and explicit. In web design, high context can rarely rely on body language or intonation except in rich content, so it tends to be communicated by animation and multiple visual stimuli. The images below illustrate these differences: 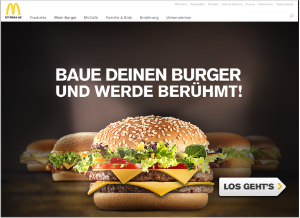 McDonalds’ Japanese homepage has multiple feature boxes, icons, details, prices, and other widgets, and has multiple areas of focus. Low context, monochronic societies respond to one thing at a time, and prefer detail of a product. So in the German McDonald’s homepage, visitors are presented with a high context graphic—a big picture of a burger—and the site itself focuses on a lot of nutritional detail.

Purchasing and the Impact of Technology

The fifth area to consider is cultural preference for purchasing and technology use. It is well documented that Germany and Italy have low levels of credit card ownership; only 15% of the 95 million payment cards in Germany have a delayed payment function, and other prepayment methods and live bank payments are preferred. In Islamic countries the principles of Islamic banking apply, so payment can be delayed as long as it does not accrue interest.

Differences like these mean it is unlikely that a single approach to e-commerce design will suffice for all global visitors, so you should test for and identify cultural preferences. Multivariate testing allows you to test these theories and identify cultural preferences. With the pharmacy brand Boots, we hypothesized that a shortened shopping cart focusing on local delivery options available in the region would improve conversions on the Boots site in South East Asia. To our surprise, though, this actually worsened performance, with the original shopping cart (which still featured a list of unavailable Western delivery options) outperforming the shorter one by 27%. We later discovered that hosting on slower networks in Asia has a significant impact on page load times; hence Southeast Asian visitors are comfortable with (or resigned to) long page dwell times, making them more open to longer page scrolls and more complex baskets. Browser preferences also have an impact; for example, IE6 or IE6-based browsers are still dominant in China with around 60% of the market. So UX designers should extensively research cultural influences on payment and technology preferences if designing with an international market in mind.

To sum up, don’t make assumptions about the cultural preferences of visitors; do research and test different types of design tailored to various cultural groups. Don’t have a template-based, one size-fits-all approach to web design; do have a flexible approach that draws on your brand assets but also allows you to reflect your users’ cultures. Don’t assume that a physical border equates to a homogenous group of people with the same preferences; do embrace the fact that even within borders and within languages there are fluid rules that apply based on culture, religion, and ethnicity. Above all, especially when designing for global brands, think about the universal elements of your brand assets really are, and which factors can be placed in context with local preferences. Your customers across the world will thank you for it.