Excerpt From the New Book “Simple and Usable”

An excerpt about the three types of user encountered in design. This is an excerpt from my new book, Simple and Usable, released this month by Peachpit Press. UX Magazine is also running a giveaway for five copies of the book. If you’d like to purchase the book, visit the book’s page on peachpit.com where it’s available with free shipping with registration.

When it comes to simplicity, you can divide users into three types.

Experts are happy to explore your product or service and to push the limits of what it can do. They want never-before-seen technology that is customized for them. Even if they’re new to a product, they have an expert attitude. In other word, they’ll spend time finding out how it works and exploring new features. If you’re making a mobile phone, these are the people who want to be able to browse through the mobile phone’s file system and tweak everything. It turns out there are relatively few of these people.

I call the next group willing adopters. They probably use some similar products or services. They’re tempted to use something more sophisticated, but they’re not comfortable playing with something entirely new— they need to be given easy ways to adopt new features. For instance, they might be interested in a more sophisticated phone, but only if they can transfer their precious contacts easily. There are fewer of these people than you’d imagine and their tolerance for learning is pretty low.

The vast majority of people are mainstreamers. They don’t use technology for its own sake; they use it to get a job done. They tend to learn a few key features and never add to their repertoire. These are the people who say, “I just want my mobile phone to work.” Most people fall into this group.

It’s tempting to think that after a while people graduate from one group to another. But that hardly ever happens. Even after years of using a product, people tend to stay in the same group.

For example, take any large group of people who’ve been using Microsoft Excel for five years. You’ll find some people who’ve explored settings and options, some who’ve got a few specialist features set up to do what they like, and others who just use it for adding up columns of figures.

It has more to do with their underlying attitude toward technology than the amount of time they spend using a product or service.

It’s tempting to design for the first two groups—they’re easier to please. But experiences that feel simple are designed for the mainstreamers. 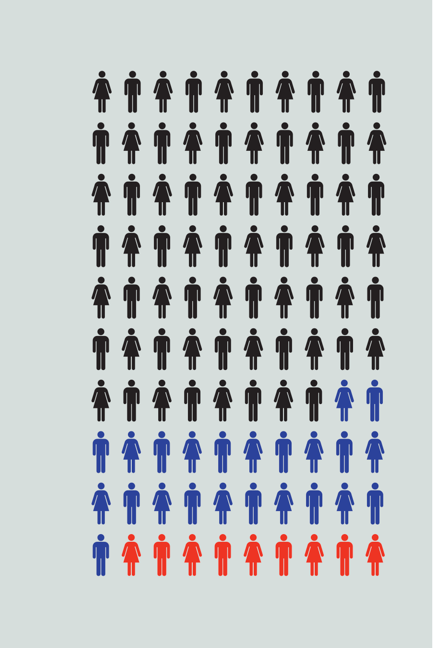 Expert users are a minority. In 2009, complex cameras like SLRs comprised only 9 percent of the digital camera market (source: CIPA).

Why you should ignore your expert customers

Most companies spend too much time listening to their expert customers—the ones who spend the most time using their products or services—because they’re easy to talk to. Expert customers are enthusiasts, they’re vocal and opinionated about how to improve what’s on offer.

But experts aren’t typical customers and their judgement is often skewed. They don’t experience the problems that mainstream customers have.

And they want things that mainstream customers don’t care about.

Here’s what one responder on Slashdot (a blog run by experts and enthusiasts) had to say when the iPod was announced: “No wireless. Less space than a Nomad. Lame.”

Another commenter wrote: “I don’t see many sales in the future of iPod.”

Commenters on another enthusiast blog, MacRumors, also wanted more: “I still can’t believe this! All this hype for something so ridiculous! Who cares about an MP3 player?”

I see this again an again: a small group of customers make noisy, persistent demands for new features that are too complicated for typical users.

You’ll find it hard to convince your stakeholders (who are insiders, and therefore, experts) that the customers who are also experts (just like them) are not the ones you should listen to. After all, your best customers spend a lot of time and money per head; they ‘get’ what you do, and they speak your languages; they they’re so reasonable—if you ask them to upgrade to the latest version, they do it without hesitating.

But if you listen to them first, you’ll create products that are too complex for mainstream customers to use. Simple and Usable was released this month by Peachpit Press. UX Magazine is also running a giveaway for five copies of the book. If you’d like to purchase the book, visit the book’s page on peachpit.com where it’s available with free shipping with registration. Giles Colborne, Giles has been working in usability and user-centred design since 1991. He formed cxpartners with Richard Caddick in 2004 focusing on creating outstanding user experiences and measurable changes to projects and products. Giles is a former President of the UK Usability Professionals’ Association and now sits on their Global Advisory Committee and international Conference Committee. He has worked with British Standards Institute in developing guidance on web accessibility. Giles is a highly-rated speaker at events around the world, and has also published the book Simple and Usable (Peachpit Press, 2010). Follow him on Twitter @gilescolborne.